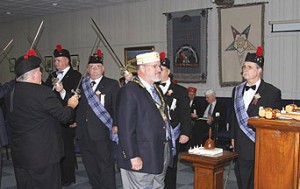 On April 7, 2011, the Valley of San Antonio made their annual trip to Kerrville, Texas, for a stated meeting. This event is hosted annually by the Hill Country Scottish Rite Club in conjunction with Kerrville Lodge No. 697. They were treated to an excellent meal of catfish and all the fixin’s, and after dinner the Craft was set to labor.

The program was to institute a Court of Honour for the Valley of San Antonio. Ill. M. Douglas Adkins, 33°, SGIG in Texas, served as the Installing Grand Commander, Ill. Reese L. Harrison, Jr., 33°, as Marshal of Ceremonies, and Ill. James W. Todd, 33°, as Prelate.

At the conclusion of the installation of officers, Ill. Adkins presented the Court of Honour members with their medallions, and Ill. Donald P. Garrido, 33°, Grand Cross, the Court’s newly installed Commander presented each member a lapel pin. In Commander Garrido’s remarks he informed the Lodge that the San Antonio Court of Honour had 63 Charter members and that the Court was now ready to financially support the Scottish Rite Cathedral and the learning center. Commander Garrido then called Ill. Adkins up front and made him the Chapter’s first honorary member by presenting him with the court’s medallion and lapel pin. In Ill. Adkins’s closing remarks, he congratulated the members and officers of the San Antonio Court of Honor and praised the Valley for its zeal and many contributions to the order.