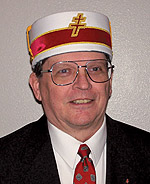 SGC Ronald A. Seale, 33°, has appointed Dale Stephen Cain, 33°, Deputy for the Supreme Council in Alaska. Ill. Cain was born in Seattle May 10, 1945, served in the US Air Force, 1966–1970, attended Seattle Pacific College and University of Hawaii, and graduated from the Washington Technical Institute in 1972. He was employed by Eastman Kodak Company, 1972–2009 as a field engineer, and now works for Western Microfilm Services. He and his wife, Karen live in Anchorage and have two children.

Bro. Dale began his association with the family of Freemasonry in Occidental DeMolay Chapter, 1960–66. He is a Past Master Councilor and Past District Master Councilor and has received the Degree of Chevalier, 1962, and Legion of Honor, 2006. He became a Mason in Occidental Lodge No. 72 in Seattle in 1984, and is also a member of Walter F. Meier Lodge of Research, Washington, and Aurora Lodge No. 15, Anchorage, where he has served as chaplain for many years. He was Grand Chaplain of the Grand Lodge of Alaska in 1999 and 2006.

Ill. Cain became a 32° Master of the Royal Secret in 1997, received the rank and decoration of a Knight Commander of the Court of Honour in 2005, and was coroneted a 33° Inspector General Honorary in 2009. Since 2007 he has served as Personal Representative of the Valley of Anchorage and is the current CEO of the Alaska Scottish Rite RiteCare Foundation.

Bro. Dale has presided over all the York Rite bodies, Anchorage York Rite College, Al Aska Shriners, and the Red Cross of Constantine. He has received the Order of the Purple Cross and is a member of the Royal Order of Scotland.