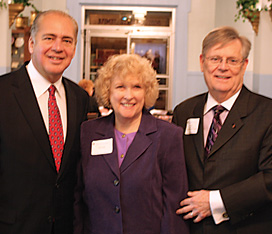 The purpose of the reception was to share Scottish Rite Masonry with the legislature, a good number of whom are members. Highlights of the evening were videos from the Supreme Council Membership Development team and the Lee O. Rockwell Scottish Rite Clinic for Childhood Language Disorders and tours of the Rockwell Center and our Scottish Rite facilities. Food and refreshments were plentiful, courtesy of former senator and Bro. Oshel Craigo, KCCH, the owner of a number of popular area restaurants.

The reception was a great success with 30 members of the legislature present as well as the governor, the attorney general, the secretary of transportation, and a number of other high-ranking state officials. With the legislative staff and guests from the Valleys of Huntington, Morgantown, and Wheeling, those attending totaled 110.

As each person left, they were given the video, A Scottish Rite Tribute to the Flag, produced by the northern and southern Scottish Rite Supreme Councils, a book on the Star Spangled Banner, and pamphlets on Scottish Rite membership and our Childhood Language Center.

The evening was a huge success, and one of the most striking statements made by the guests was that they felt safe in our building and in our company. One of the legislators even made contact with our language center for their own child.