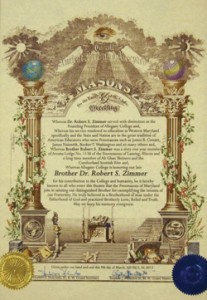 On March 9, 2012, the Allegany College of Maryland dedicated their theatre to Bro. Robert S. Zimmer, 32°, as part of their 50th Anniversary Celebration. Dr. Zimmer was the founding president of the college, then known as Allegany Community College, in Cumberland, Maryland. ACC was founded in 1961–62 and Zimmer presided over its growth until 1967, when he moved to Kankakee, Illinois, to form another college, Kankakee Community College. In 1971 he became the Founding President of yet a third college, Passaic County Community College in Paterson, New Jersey. As a USAF-Reserve Colonel, he was called to active duty in 1975 where he was instrumental in gaining accreditation for the Community College of the Air Force while working at the Pentagon. He received his BA from Brockport State Teachers College, New York, and his M.A. and Ph.D. from the University of Chicago. He is one of only a handful of people who have founded three different colleges!

Bro. Zimmer passed away in 2009, but was a 48-year Mason and 45-year SR Mason, with membership in the Valley of Cumberland, Maryland. He was also a member of the Ali Ghan Shriners in Cumberland, serving as Chief Rabban prior to moving in 1967.

The Knights of St. Andrew and the Ali Ghan Highlanders performed the Opening Ceremonies with full pomp and circumstance and colors. Bagpipers played “Scotland the Brave” and “Amazing Grace.” The college choir sang the National Anthem and closed with the Alma Mater.

Grand Master of the State of Maryland, Stephen J. Ponzillo III, attended the ceremony and presented a proclamation to the College and the Zimmer family, specifically to Martin T. Zimmer, 32° (brother of Robert) and to William R. “Chip” Zimmer, 32° (son of Robert).

Additionally, The Cumberland Scottish Rite and Knights of St. Andrew presented a Proclamation of Respect. Other proclamations and plaques were presented by the City of Cumberland, Allegany County Commissioners and the Governor of the State of Maryland. All plaques will be permanently displayed at the Robert S. Zimmer Theatre at ACM.