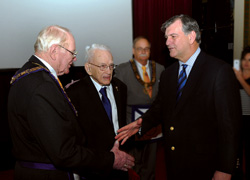 On January 21, 2012, Bro. James K. Biggs Sr., 32°, KCCH, was presented with a special 85-year membership pin by the Grand Lodge of Texas at a ceremony held in the Dallas Scottish Rite Cathedral. GM James F. Brumit, 33°, said the Grand Lodge has never had a member serve this long, so they had to make a unique pin for Bro. Biggs!

In 1911 Bro. Biggs saw his first automobile, and remembers running blocks to witness the noisy, smoky contraption go puttering by. He remembers Edison’s early lights and Bell’s hand-cranked phones. His grandfather, a cavalry captain in the Civil War, shared anecdotes with your James. Babe Ruth was an idol, and he can remember the Babe becoming a New York Yankee. He was one of the first Boys Scouts in America and eventually became Scout Master of his own troop. After completing the eleventh grade, he received a teaching certificate and taught math and Spanish in Marathon, Texas. Bro. Biggs went on to serve as superintendent of several school districts across the state and dedicated more than four decades to public education before retiring in 1967, at age 65.

In an interview with the Dallas Morning News, Bro. Biggs said, “In life, you reach a peak once in a while—and it’s a peak now…. But there’s more of it.”