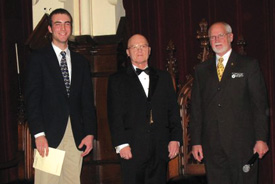 Ill. Paul R. Kach, 33° (1900–1983) was an outstanding member of the Scottish Rite Valley of Baltimore, Maryland, and an ardent supporter of the Order of DeMolay. The essay contest, which bears his name, was established in his memory in 1984. Each year since then, the Scottish Rite supports the International Order of DeMolay via the Scottish Rite Paul R. Kach DeMolay Essay Contest with DeMolay International headquarters selecting a theme. Awards in two categories (10th grade and below and 11th grade and above) are available in each of DeMolay’s eight regions, and two Grand Prizes in each category are selected annually from regional DeMolay winners by a committee of distinguished Scottish Rite Masons.

The theme for the 2010 Kach essays was “DeMolay—The Premier Youth Organization.” The Grand Prize winners were Jonathan Webster, Eleventh Grade and Above Group, and Garrett Lewis, Tenth Grade and Below Group. The awards were presented at regional ceremonies.

At the Valley of Philadelphia’s Holiday Celebration Dinner held on Friday, December 17, 2010, Ill. Russell W. Baker, 33°, Active Member of the Supreme Council, accompanied by Ill. Robert J. Taylor, 33°, Commander-in-Chief of Benjamin Franklin Consistory, presented the Grand Prize check of $1,200 to Jonathan T. Webster from Langhorne, Pa. Webster was accompanied to the event by his parents and his sister, who is active in Rainbow. Jonathan read his essay, which was warmly received by the Brethren and Ladies of the Valley of Philadelphia.

Jonathan Webster is a student at Bucks County Community College majoring in Business Administration and is a member of the Phi Theta Kappa honor society. While attending college, he works part-time at St. Mary Medical Center as a Dietary Aide. He enjoys paintball as well as working on his YouTube channel, Ducttapestuff, which offers tutorials on creating all kinds of things from duct tape.

At the stated meeting of Denver Consistory on Monday, December 20, Ill. Stephen M. Munsinger, 33°, SGIG in Colorado, presented Garrett Lewis with his Grand Prize check of $1,200. Garrett was accompanied to the event by his family, the State Master Counselor of Colorado DeMolay, and other DeMolay representatives.

The Supreme Council is proud to work with this fine Masonic youth organization in encouraging the moral and intellectual growth of young men across the nation. We salute Jonathan and Garrett for their outstanding achievements! 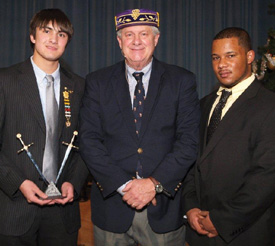