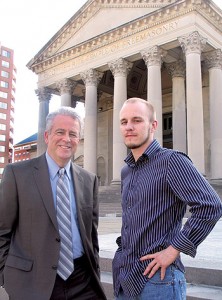 May is National Military Appreciation Month and includes Loyalty Day (1st), VE Day (8th), Military Spouse Appreciation Day (7th), Armed Forces Day (15th), and Memorial Day (30th). This very important month recognizes and honors all military personnel—those men and women who have served throughout our history, all who now serve in uniform, their families, as well as those Americans who have given their lives in defense of the freedoms we enjoy today.

Freemasonry and the military services have always gone hand in hand through American history. Who cannot feel a swell of pride at the names of those Masons who have so bravely served our country: George Washington, John Paul Jones, Audie Murphy, Omar Bradley, Arleigh Burke, Douglas MacArthur, Walter E. Boomer, and countless other heroes? Words like commitment, duty, trust, honor, and loyalty are used by soldiers and Freemasons alike.

Entering the back door of the House of the Temple a few weeks ago, I noticed a young electrician gathering up his tools and supplies from the back of his vehicle. I offered to help him carry his things into the building. After chatting a while, I discovered that his name was Jason Orem. He was new to the job and had recently returned from a tour of duty in Iraq.

It was apparent that Jason admired and respected his superior officer. While talking about experiences during his time in the Middle East, Jason continued to refer to the leadership qualities and character of his sergeant, Tomas Daniel. It was clear that his sergeant lived his life according to the lessons of the Craft.

I asked Jason if he had thought about joining the fraternity. He expressed interest, but didn’t know how to go about it. I reached into my wallet and pulled out not a petition, but a dog-eared copy of an email I have carried with me for 6 years. It contained a powerful example of how the mystic tie transcends culture and war. Jason read it as he stood there.

Dear Dean,
A couple of months ago you ask me about a story involving my father-in-law, Albert J. Bland. The man who knew this story is Ed Kreiner. He was Albert’s neighbor and long time friend. Here is the story as it was e-mailed to me.
Sincerely, Jules Bernstein

Jules,
Your father-in-law was, following the surrender on the southwest portion of Bataan, taken to a POW Camp in the area of Cabanatuan, Philippines, where he stayed for a short period of time. He was, like all of the POWs physically in bad shape. Nevertheless, he was assigned to kitchen duty—…. On one of his trips to the designated place to dump the garbage, he noted a small package, wrapped in brown paper, tied, and on the wrapping he saw the Masonic emblem (square and a compass). He quickly hid the package and upon being dismissed from his work, he went to his assigned barrack area and privately opened the package.

It contained medicines (especially quinine). He reported his find to his superior officer.

Thereafter, every evening meal, he found yet another package—again with medications. This went on for his entire stay at that camp—prior to his being shipped off to Formosa (Taiwan) to another camp. Meantime, Al inquired about the emblem (not being at all familiar with it) and was told by a Mason that it was the international emblem of all Masons. Al knew that it was being placed there either by a Japanese or a Philippine Freemason. He never learned the identity of the individual.

Al considered the act to be one of significant bravery—for should the individual ever be discovered and identified, surely he would have been put to death. The acts were extremely appreciated as Al stated to me that the medication saved many, many lives….

After his liberation from a Slave Labor camp in Chengchiatun, Manchuria, and on his way back to the States, he was hospitalized. The first thing Al did was to inquire of the hospital medical staff if he could talk to a MASON. That happened in short order. Al explained his request to the Mason and advised him that he, Al, wanted to be a Freemason then and there. Within a few days, a special team of Masons arrived at the Hospital and in a private area, Al was administered the major three (3) degrees of Masonry—and thus was declared a “Master Mason.” The acts of the Masons are noteworthy, because this is a most unusual occurrence. To arrive at the 3rd Degree, it takes generally months of study and preparation. Such was basically tabled in Al’s case….

That’s the story as I remember it. Guess he shared it with me because we were brother Masons—and surely he exemplified Masonry and its tenants with honor.

I find that on some rare special occasions, I share his story with others with whom I share great respect. The bad part is that I have to often fight tears when telling his story.

Hope this helps you some.
Ed Kreiner

After Jason finished reading the email, without hesitation he said that he wanted to be a Freemason. Later this month, I will be at Jason’s initiation into Highland Lodge No. 184 AF & AM., Baltimore, Maryland.

Bro. Albert J. Bland died August 20, 2003. He served as national commander of American Ex-Prisoners of War, was a member of American Defenders of Bataan and Corregidor, and helped to create the Prisoner of War Medal that was established by Congress in 1985. President Ronald Reagan awarded him the Prisoner of War Medal in 1988. Bro. Bland died on the 58th anniversary of the day he was liberated.