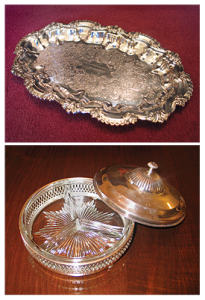 Right: Engraved tray (above) and silver candy dish (below), souvenirs of the 1959 and 1965 Sessions, respectively. (Photos: Elizabeth A. W. McCarthy, The Scottish Rite Journal)

Back in March 2011, I had to remove artifacts from their display cases to put into “protective storage.” As you know, the House of the Temple is undergoing major renovations as part of the Rebuilding the Temple Campaign. Construction projects are underway in phases to preserve the building. The roof, the front door, the steps, the elevator well … each of these phases require different sections of the building to adapt as the construction occurs. On this particular day, we had to move everything that was near the back elevator in the basement of the House of the Temple. When I say everything, I mean everything! Even the cases that housed the books and artifacts were removed to protect them from possible damage.

As I was packing, I found some unique and interesting artifacts. On one shelf was a silver topped glass dish that looked like an ashtray. It was grimy and tarnished. In fact, you could barely see the engraving on the lid. I took it over to one of our building caretakers who polished it up like new. The lid of the bowl read, “Scottish Rite 33° S.J. 1965” Hmmm … I wonder what that was used for? As I looked closer at the piece, I realized it was not an ashtray, but actually a beautiful candy dish. I kept looking and found a tarnished silver tray that read, “The Supreme Council, 33° October 1959.” It is a beautiful little piece, most likely a serving tray for candies or appetizers. I wanted to know more about these pieces, so I went on a “treasure” hunt.

Where to start? I pulled the Transactions of the Supreme Council, 1959 off the shelf and began to read. Not one mention of the little silver tray, as gift or otherwise, but I found many interesting references to the building. Fifty-two years ago, everyone was looking at the House of the Temple and praising its grandeur and beauty, welcoming visitors from around the world. We continue to do so today. But, as far as the history on the artifacts … well, no luck there. I continued my work packing the remainder of the items so that the construction could commence on the elevator. I came across aprons, jewels, gavels, porcelain, and many mementoes given as gifts to the various Grand Commanders over the years.

As I continued to move the objects, I received a call from another employee. She asked me to come to the finance office safe because they had an artifact that didn’t really seem to belong in there. When I arrived, I pulled this long wooden box off the shelf. It was dusty, but I could tell it was beautifully handcrafted. I carefully lifted the lid of the box and found a beautiful wooden setting maul. The edge of the box is stamped, “Golden Ebony” on one side and “Tiffany & Co. New York” on another side. It is lined in purple velvet and has a tiny key in the lock on the front. The setting maul is also made of golden ebony and trimmed in gold. Yes, real gold!

When I removed the setting maul from the box, I read the engraving on the front, “Presented to the Supreme Council, 33°, A. and A. S. R. of Freemasonry for the Southern Jurisdiction U.S.A., George Fleming Moore, 33°, Sovereign Grand Commander by Henry Lansburgh, 32°, October 18, 1915.” I personally think that the most beautiful part of the object is the handle, which has an ornate and fantastic double-headed eagle—in gold—on the top (left). Hmmm, of course, this led me to wonder who Henry Lansburgh was, and another hunt ensued!

I went to my desk and looked him up. According to the Supreme Council’s database, all we know is that Henry Lansburgh was born February 2, 1869, in Washington, D.C. He was listed as a “merchant” and joined the Scottish Rite in Washington, D.C., in 1912. Mr. Lansburgh received the KCCH in October 1917 and died November 27, 1925.

There has to be more about this man. Such a fantastic gift would have cost quite a bit in 1915. So, who was he? I located more about him. Henry Lansburgh was one of fifteen children of the late Gustav Lansburgh who was co-founder of Lansburgh & Brothers Department store in 1860 in Washington, D.C. Henry served as the Vice President of his father’s store and was a beloved and well respected person in the history of Washington, D.C., affectionately known as “Call-Me-Henry.”

Further research produced even more interesting information on Henry. The 1917 Transactions of the Supreme Council state that for the biennial session Henry decorated the statue of Albert Pike with “United States and Confederate flags and a large wreath.” He also supplied small flags to decorate the House of the Temple and provided an organ recital and musical in the House of the Temple for the pleasure and entertainment of the Scottish Rite Brethren and their ladies in the District of Columbia. And, according to Sovereign Grand Commander George Moore, Henry did these things “not only with his compliments but with great pride in so doing.” 1 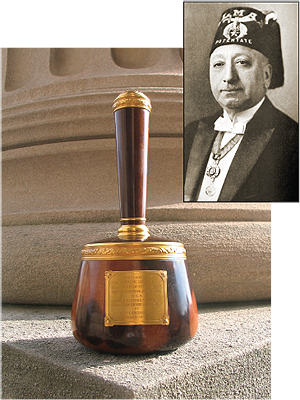 Right: A golden ebony setting maul made by Tiffany & Co. for the consecration of the House of the Temple, 1915, a gift from Bro. Henry Lansburgh, KCCH (above right). (Setting maul: Elizabeth A. W. McCarthy, The Scottish Rite Journal; Lansburgh portrait and notice: Archives of the Supreme Council, 33°)

Henry wasn’t just active in the Scottish Rite. It turns out he was also an active Shriner. He became Potentate of Almas Temple in Washington, D.C., after “a spirited election” 2 and served in 1920, 1921, and 1925. He also made the nominating speech at the San Francisco convention that brought the Shrine to Washington, D.C., for their annual convention in 1923. Henry was described as “dynamic, sparkling and extroverted.” 3 Another mention in The New Age (now The Scottish Rite Journal) commends his gifts and loyalty to the Masonic Order, as it claimed that he attained Masonic distinction that few men experience. “Those who are brought into intimate association with Henry find him to be an exemplary Mason who believes in doing big, worthy things and saying little about his generosity.” 4 Henry held honorary membership in seventy Masonic bodies, including twenty-five Shrine temples, and had visited at least 100 of the 154 Shrine temples that existed in 1925.

When he died, all Shrine activities in the District of Columbia were cancelled for 30 days. (And, this happened to be over the holiday season!) Funeral services were held at the Scottish Rite Cathedral of Washington, D.C. A member of Benjamin B. French Lodge, his will decreed that his grave marker was to have “Call Me Henry” with his birth and death dates—and nothing else. He was a champion to all things charitable and left money to religious organizations of all faiths, orphanages, and Masonic charities, particularly the Shriner’s Hospitals. He even left his home and all his belongings to his longtime housekeeper, with a monthly stipend for life. Henry is buried at Rock Creek Cemetery in Washington.

What a story! You know, I think this setting maul, donated for use at the Consecration of the House of the Temple in 1915, is such an amazing find. Who knows how long this Scottish Rite treasure was hidden away, well protected inside the safe where we keep our financial records, but dusty and forgotten. And, who knows how it ended up there.

What about those engraved silver objects? Well, it just so happens that a long-time employee of the building saw them on my desk, and she mentioned these little items were given as gifts to those who attended our Biennial Sessions in 1959 and 1963. Nice gifts! And, as for the out-of-service broken elevator? Well, construction is complete and now that it is back in working order, each of these little pieces will be placed back on display for everyone to enjoy.

Please come by the Temple and see them for yourself!