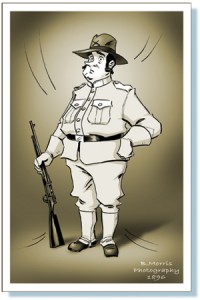 written by Michael A. Halleran, 32°

The diary entry below appears—from an examination of the original leaves of Bro. Brother’s journal—to be a composite entry for the entire month of May 1898 written the following month.

Taken by itself, Mezcal1 is a charming drink, smooth and subtle, but one must take care in mixing it. It goes well with fruit juices, particularly those of the citrus variety, and it is an ideal spirit in tropical climes. It is a grave error, however, to mix it with syrups, cherries, tonic water or handguns, and even the minutest quantity of it introduced into a company of banditos or indeed of volunteer cavalry should be assiduously avoided.

I was having a drink at the bar in the Menger Hotel in San Antonio, following a stay with friends. Scheduled to take the Southern Pacific home later that night, I had just settled in at the bar, when I was jostled by the fellow next to me.

“He doesn’t like you,” said a swarthy cowboy with a walrus mustache, pointing to his equally dirty companion in a battered sombrero and a greasy vest.

I would have damned his eyes for him right then and there if it weren’t for a well worn Schofield Patent Revolver hanging at his side.

“I’m sorry,” was all I could think of in reply.

“I don’t like you either,” he continued menacingly. “You just watch yerself, City Boy, we’re wanted men. I’ve got the death sentence on both sides of the Rio Grande!”

“I’ll be careful,” I said, sipping my drink and trying to stop my bowels dissolving while remaining calm.

“You’ll be dead!” he said, slamming down his glass and slapping leather.

If you are ever faced with the situation of having a pair of wanted fugitives take an instant dislike to you and seek to put more lead in your diet, I have a bit of advice for you. Sudden movements are to be avoided. Resolute calm, a steady eye, and cat-like reflexes with a horse pistol would also come in handy. But should you find yourself entirely destitute of those qualities, as I was, allow me to advocate screaming at the top of your lungs the use of a well known Masonic plea. Bereft of every advantage, I took the latter course, and belted out that phrase to which no Mason, without committing perjury, can fail to respond.

I’m not sure what surprised me most—the fact that my appeal worked, or the outlaws’ expressions as an army officer and eight troopers appeared from nowhere with pistols and carbines leveled. The inevitable results of this likely crossfire dawned on me shortly thereafter. The Lieutenant, a slim, mustachioed gent in a volunteer cavalry rigout, gave the curt command “Put down the pistols if you know what’s good for you,” and my erstwhile friends complied at once.

Detailing three troopers to disarm the rogues and take them off to the town marshal, he turned to me.

“Jack Pershing,” he said by way of introduction, “First United States Volunteer Cavalry, and a member of Lincoln Lodge No. 19, Lincoln, Nebraska, at your service.”

I introduced myself, thanked him, and still marveling at his sudden appearance, I asked where the devil he had come from.

“Why, we were sitting right over there,” he pointed to the back of the bar, “recruiting for the war with Spain. I saw you come in and wondered if you were going to sign up. You look like you could use another drink. Let me get you one courtesy of the Rough Riders.”

Over a couple of doves,2 he explained about these volunteers—cowboys and clerks, lawyers and roughnecks, a band of brothers dedicated to the swift and condign punishment of Butcher Weyler3 and the Spanish tyrants. Cuba Libre! Remember the Maine! and all that. We were swapping a few Masonic stories too, when before long we were joined by one of the commanders of the regiment, a stocky fellow sporting the tinware of a Lt. Colonel with the rather odd name of Crowsveldt Roosevelt.

“Mr. Brother,” he said in earnest tones, “the provost has informed me that you were responsible for the capture of two rather unsavory fellows wanted by the authorities on both sides of the border. Let me congratulate you, sir,” he said, shaking my hand like the town pump. “Bully! Just bully!”

At this, Lt. Pershing chimed in claiming that I faced down both outlaws unarmed and only summoned assistance “from a brother Mason” when confronted by their drawn pistols.

“Masons are you? Both of you!? Extraordinary. And do I assume that you summoned this help by a coded signal?”

“Well, Colonel,” I said, “I should like to tell you more, but to do that, you would have to petition our Order.”

“When this business with Spain is over, my friend, I may do exactly that. But here,” says he, “why don’t you join us? You’ve got the mettle for it by the way you handled those desperados. You can ride can’t you? And shoot straight?”

It must have been the Mezcal. Or perhaps it was being in the company of these fine fellows—men of action—either way, from what I recall foggily blurrily of the evening, I told the Colonel that I could shoot straighter than any man in his regiment. A sporting man, he told me the drinks and cheroots were on him if I could, whereupon he produced his sidearm and a pack of playing cards. Tacking a red ace and a black ace up on the wall—he hauled out his revolver and drilled the spade slightly off center, handed me the pistol, and called for me to shoot the center diamond. You’ll hardly credit it, but with barely a thought, that’s exactly what I did.

Roosevelt slapped me on the back, roaring “Good show! Capital! Well done, sir!” There followed drinks all around and the finest cigars, toasts to myself, the Lieutenant, foolish outlaws, the crew of the Maine, and Freemasonry, and before I knew it, I’d signed on with the Rough Riders—which judging by the amount of liquor they had on board appeared to me to be like the Shrine with guns.
To Be Continued.…

Editor’s Note
The Spanish-American War began with Spain’s declaration of hostilities on April 23, 1898. Righteous indignation in America at Spanish treatment of Cuban nationalists helped fuel the conflict and was instrumental in Theodore Roosevelt’s personal commitment to the war with Spain and support of Cuban independence. Once war was declared, Roosevelt resigned his position as Assistant Secretary of the Navy and helped to convince the Army to raise an all-volunteer regiment, the First U.S. Volunteer Cavalry that quickly became known as the “Rough Riders.” Arriving in San Antonio on May 15, 1898, Roosevelt stayed at the Menger Hotel where an ad hoc recruiting station was set up in and around the hotel bar, with the regimental encampment in the International Fair Grounds, in what is now Roosevelt Park. See Peggy & Harold Samuels, Teddy Roosevelt at San Juan: the Making of a President (Texas A&M University Press, 1997), pp. 30–31. See also Marilyn Bennett. It Happened in San Antonio (Globe Pequot, 2006), p. 55. Visitors to the Menger Hotel today will note the presence of two bullet holes in the east wall of the bar, which are attributed to Theodore Roosevelt.

At the time of Bro. Brother’s encounter with him, John J. Pershing (1860–1948) had not yet achieved the pinnacle of fame, or the sobriquet “Black Jack” by which he is universally known today. He took his degrees in Lincoln Lodge No. 19, Lincoln, Neb., in December, 1888, and was later honored with a fifty year pin in 1939.

Students of cinema will undoubtedly notice similarities in dialog from a George Lucas film of the 1970s. However, owing to the fact that this diary entry is previously unpublished the editor is forced to conclude that any similarity is entirely coincidental.

Endnotes
1. Tequila.
2. Possibly a reference to a Paloma (Spanish: dove), a cocktail made from tequila and grapefruit juice.
3. Bro. Brother refers to Spanish General Valeriano Weyler y Nicolau, whose earned universal opprobrium in the American press for his harsh repression of Cuban independence.