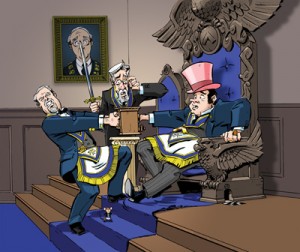 I’d been considering it off and on for months. Actually, when I was installed, I was savoring the deliciousness of it, and often in the middle of a meeting I would console myself with the thought that soon it would be June, and we would be Going Dark.

I gather there’s nothing in the Laws of Masonry that requires a lodge to go dark during July and August, but many lodges do, and our grand lodge allows it at the discretion of the Master. Some of our lodges suspend business because they’re busy with the harvest; others recess because it’s just too hot to sit around three candles and fourteen men in wing-collared shirts bickering arguing debating discussing the merits of chicken salad sandwiches over ham salad sandwiches. But in every case, the decision rests firmly with the Worshipful Master, and in this instance: I am he he is I I am me he is me. Tonight’s meeting was the last before the Masonic summer, and I had still not decided.

Since installation—which you will recall was such a complete surprise to me that I didn’t even bring my hat1—I have been pestered assisted by numerous well-meaning souls damn their eyes during our meetings, each attempting to teach me proper Masonic etiquette (in the finest traditions of our Order ) by calling out suggestions from the gallery. For quite a while, I forgot to wear my hat when presiding, but of late I’ve been diligent in donning that appliance—either mine or the lodge’s notorious “Helm”—and the catcalls of “Put on your hat!” have subsided … somewhat.

The proper use of the gavel has also been a source of consternation, and I’ll be damned if I can remember who gets how many raps, which results in a great deal of standing up and sitting down by all concerned. Balloting has proven equally challenging. The following variations on the Master’s instructions before balloting do not, I have found, meet with approval from the Craft:

On the first ballot I presided over, I fumbled about too much and tipped the whole damn thing over, which resulted in a nearly ten-minute scavenger hunt for the balls by my long suffering S.D. and the organist. At the next ballot, things went better, but this evening my past successes were eclipsed entirely.

The Senior Deacon prepared the ballot and placed it on my pedestal as always, and I nervously gave the Master’s injunction to “vote well” with my hand inside the ballot box. Whether through disquietude, dithers, or excitability, I somehow laid my fingers on a black cube and it was half-way in the hole before I realized what I was about to do. I then tried to pull it out—which was impossible without dropping the cube. I struggled a bit with this, before the S.D. stepped forward.

“Is everything all right?” he whispered.

“Yes, yes, perfectly fine,” I said in a normal tone, “I’m just trying to get this cube out.”

Someone gasped, and the secretary came over.

“Worshipful Master,” he said in low tones, “you are entitled to vote any way you wish, but you must not announce your vote! By-Law 4-131 clearly states.…”

“I’m not announcing my vote; I’m just trying to get this cube out,” I repeated, wiggling my fingers in that wretched hole. I almost had it, twisting both fingers around like a monkey caught in one of those infernal traps2 when the wooden partition inside the box broke with a snap. This drove a splinter the size of the True Cross into my index finger, whereupon I black-balled my first candidate, albeit not intentionally.

Around that time, the candidate’s recommender stood up with great agitation.

“Worshipful Master, I object to this!” he said, echoing the secretary’s comments.

It finally dawned on me—I’m a quick study, you see—and I explained to the lodge that I was not casting a ballot, but that I had inadvertently become entangled in the ballot box, and called for a short recess. By this time, however, I couldn’t remove my fingers from the box.

A crowd formed around my pedestal.

“Wiggle them out,” said Blaine.

“We should ice his finger,” said another.

“We might have to cut them off,” this from Crofoot—damn blast his eyes. Finally, with two deacons holding the box, and a steward hanging onto my arm, we succeeded in extricating my fingers, but at the cost of the ballot box which flew apart in three pieces.

We finished balloting with a borrowed box from the Eastern Star—and our candidate was elected without further ado.

The last item on the agenda: Going dark? Without a moment’s hesitation, I willed-and-pleasured it, and with a rap of the gavel, we closed until September 4, 1911, or a case of sherry, whichever comes first.

Editor’s Note
Although there is no definitive history of the phenomenon known as “going dark,” nineteenth-century Masonic periodicals from both America and Great Britain are full of discussion about the propriety of suspending labor over the summer months. We may surmise that these discussions occurred either because of the exigencies of the harvest, or due to the extreme heat of the summer months when many lodge rooms occupied upper story rooms, or a combination of the two factors. In America, Lodges in the 1850s would routinely apply to their grand lodges for permission to close during the summer months, others were granted authority by the grand lodge to go dark “provided a majority of the members present shall vote in favor.” Mackey, writing in 1858 notes that in some instances, lodges kept open due to excessive work during the summer months, which he noted sometimes included September in Southern jurisdictions, despite the heat. “The trials of a candidate for symbolic Masonry,” he wrote, “required to gather his knowledge amidst the mephitic gases and rarified air of a top-most story in a July night, are many degrees more disagreeable and perilous!” This trend of suspending all labors gained increasing popularity such that by the twentieth century, it was viewed as a long-standing custom for lodges to cease all but necessary functions during the summer, requiring no vote of the membership. In this instance, Bro. Brother appears to be acting under the authority of a grand lodge by-law enabling him to suspend work at his will and pleasure.

Endnotes
1. See Brother Brother’s Journal, “The Helm of Hades,” March-April, 2010.
2. Bro. Brother is apparently referring to a method of trapping monkeys common to Asia, by which a jar is baited with comestibles slightly smaller than its opening. The monkey, upon discovering the cache, will devote itself entirely to removing the food, but the circumference of his hand around the desired object will prevent its removal, effectively trapping him.