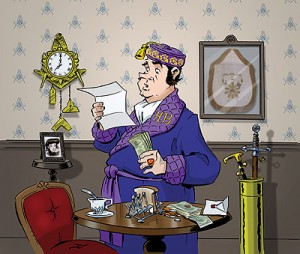 I don’t know about other lodges, but the Oriental chair in my lodge is damned deuced uncomfortable. A high-backed, Baroque affair with a bit of horsehair upholstery and a finicky spring—just there—to remind the new Master sic transit gloria mundi. The whole thing is surmounted by an enormous eagle that was added to the chair in the sixties. Much faded, this gilded bird—so the story goes—was liberated from Chapultepec after the fall of the Emperor Maximilian by one of our number who saw service with the Juaristas.1 Joined to our old chair skillfully, but without a thought for the added weight, the whole thing is so top-heavy that the new Master better not lean, lounge, or take his ease lest he fall over backwards, which makes me almost certain some Past Master had a hand in its design.

Recent developments have added to the discomfort, uneasiness, disquiet, uniqueness of the Master’s chair. Our aged roof has succumbed to this Spring’s heavy rains—and a steady drip just near the pedestal makes the chair not only uncomfortable, but damp to boot. Too bad the WM couldn’t have at his elbow a cup of hot tea with two or three shots of brandy.

Moran—the greengrocer who rents from us below—had complained in early March that he had a leak, but on strict examination we could not find the source, so I put the matter over to the building committee and promptly forgot about it. By mid-March, we’d had two frog-stranglers and a typhoon, followed by a week of drizzle. And we did discover Moran’s leak, plus four more besides.

At the second March meeting, Crist—one of our members, and a builder by trade—reported for the building committee that the roof was badly damaged, replacement the only option. He offered his services to fix the roof at cost—$210.85 all told, but before anyone could say “Aye” or “Nay,” Reece, the Treasurer, stood up.

“Why ever not, Bro. Treasurer?” I replied.

“Because after paying per-capita tax in April, we have only $17.22 in the treasury.”

“Well then,” I said, before I even thought about it, “we will just have to raise dues.”

It would have caused less uproar if I had suggested we admit old men in their dotage, or madmen, or atheists. or libertines.

“What!?” said McPhee, one of the Four Horsemen2 in the northeast corner, “You can’t DO THAT!”

“What’s he doing?” Griswold asked with his hand cupped to his ear.

“He said we have to raise dues,” Poole repeated to him loudly.

“Why, we’ve never raised dues in this lodge since I’ve been here, and in my opinion we never should.…”

“Brethren,” I said, “what would you have us do? The roof is leaking badly, the tenant has complained, some of the seats in the gallery are wet.…”

“If you want to raise the dues,” said Hendricks forcefully from the other side of the room, “you will need to change the by-laws, and that requires you to send out a summons to all the members, and lay the question over for the next meeting.”

“It that a motion, Bro. Hendricks?” I asked.

“It is,” he said, wringing the water from his sleeve.

The vote passed 10–4, and following the meeting I set to work. Griswold was correct, we hadn’t raised dues since 1868, from $2 to a princely $5 per year.3 Armed with that knowledge, and taking into account the 209 members on our books, I drafted a summons notifying the membership of a proposal for a modest increase of $2 in dues. This would more than cover the anticipated repairs, and leave room for cheapskates to reduce the increase a little contingencies in the future. More than reasonable, I felt.

To any Masters worried about poor attendance at lodge meetings, I would suggest putting a dues increase on the agenda. Normally, we can count on fifteen to twenty members in attendance, but for this evening’s meeting, we had sixty-two, and we had to scramble to find chairs and aprons for them all. Apart from the regulars, there were a familiar few faces, but I didn’t recognize the rest. After the opening, I went straight to New Business.

“Worshipful Master—why do we even need to raise dues at all? Why don’t we just conduct a raffle to raise money, or invite people to dinner by subscription?” said Trask.

“A raffle might run us afoul of the law, but a dinner charity might raise some money. Are you volunteering to cook the dinner and oversee the evening?” I asked.

I explained my rationale for the increase, and saw familiar faces nodding in agreement, but many more that were stoically unmoved.

An older brother stood up; I didn’t recognize him, but he looked tight-fisted.

“Worshipful Master, what I’m worried about is that this increase will have the effect of denying the benefits of Freemasonry to both prospective candidates and existing brethren of limited means. We are taught to value the internal not the external qualifications of a man, and this would simply preclude all but wealthy members!”

“I don’t disagree,” I replied, “but the alternative is to deny the benefits of this lodge to every member rich or poor should the roof give way under this deluge.”

With no further comments, another brother called for the question, and the dues increase was resoundingly defeated by a three-to-one margin!

For the first time in my Masonic career, I felt real bitterness and despair fatigue. How can the noblest and best of men have such little regard for our institution to let it fall in about our ears through neglect? I looked forward to several glasses a small nip of sherry before retiring.

I passed a fitful night, dreaming of rising waters and me chasing the lodge charter down Grand Avenue on a raft, which a ferocious thunderstorm outside only abetted with peals of thunder and a driving rain.

Morose and sullen over breakfast, I eschewed the newspaper and was preparing to do the same with the morning post when a large and curious envelope caught my eye. It had not passed through the US Mail but had been slipped into my mailbox—hand delivered. Opening it, a flood of coins and banknotes spilled out, and a letter, unsigned:

Worshipful Master:
We desire the enclosed $327.67 to go for repair of the roof and such other and further repairs as the building cmtee shall see fit.
Fraternally Yours, 12 Fellow Craftsmen

In haste, it seems, I had thought the worst of my brethren, and in haste they had combined to do their best for Freemasonry.

Editor’s Notes: Fundraising, and the need for it, is not a new phenomenon among Masons, although it has not always enjoyed official sanction. Some grand jurisdictions in the nineteenth century flatly outlawed any fundraisers. An 1873 decision by the Grand Lodge of West Virginia, for example, while recognizing that emergency assessments might sometimes be required, stated that “there is no power in a Lodge to raise money except by regular dues.” In an effort to avoid these strictures, and to avoid an unpalatable raise in dues, some Lodges resorted to more unorthodox measures. In 1878, the Grand Lodge of Pennsylvania censured Brookville Lodge No. 276 for using “un-Masonic means to raise money to pay its debts” through what was, presumably, a lottery. In 1918, the Grand Lodge of Michigan reminded its members that raffles, lotteries and “various gaming devices” were not only un-Masonic, but also violations of state law. In the early part of the twentieth century, the Grand Lodge of Illinois warned its members against the use of chain letters for raising money, labeling that practice as “idiocy.” Charity suppers are recorded as occurring in the nineteenth century for such purposes of buying officers badges, and one report of a “lobster smoker” by El Jebel Temple, A.A.O.N.M.S., in Denver raised enough money to send the local “Arab Patrol” to a Masonic gathering in San Francisco in 1902. See Grand Lodge of West Virginia, Reprint of Proceedings (1865–1881) (Wheeling: John Baker, 1882), p. 648; Grand Lodge of Pennsylvania, Minutes (1875–1880), vol. 12 (Lancaster: New Era Printing Co., 1907), p. 195; Grand Lodge of Michigan, Transactions (Read City, Mich.: N.P., 1918), p. 61; Grand Lodge of Virginia “Report of Illinois GM Daniel G. Fitsgerrell, 1920,” Proceedings (Richmond: Everett Waddey, 1921), p. 52; “From the Grand Matron,” The Eastern Star (Indianapolis), vol. 12, no. 8, (January, 1900), p. 5; “Here and There,” The American Tyler, vol. 16, no. 18 (March 15, 1902), p. 436.