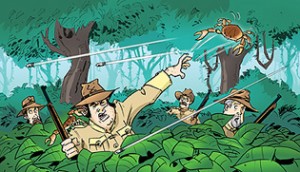 Date: July 1, 1898; Tampa, Florida
Weather: Sweltering | Outlook: More of the Same
It’s a terrible feeling to awaken with the strange sensation that one has committed some indiscretion after a long night. Still more unpleasant is the gnawing inability to quite lay one’s finger on it. Fortunately, the army is here to help. As I came to awoke in unfamiliar circumstances I was pondering on how in Blazes I came to be sleeping in a tent with three other fellows (all snoring soundly) when a bull-necked corporal burst in banging a tin cup with a bayonet.

“Welcome to the Rough Riders, ladies!” he shouted, “now git up and fall in outside. NOW!”

I choked off a reflexive Damn your eyes! as the events of the night before came back to me; I recalled particularly that before I was sworn in at the Menger Hotel,1 Col. Roosevelt took me aside and explained that if I joined the regiment, I must be prepared not merely to fight, but to perform the weary, monotonous labor incident to the ordinary routine of a soldier’s life, and be ready to face not only bullets, but fever too. I assented readily, but hadn’t counted on the fact that I would have to arise before 9:00 a.m.!

Still, there was nothing for it, so hastily dressed, I assembled outside with the others. There was a score of other fellows in various states of déshabillé all formed in a ragged line. Pale clerks with white collars, leather-faced adventurers, would-be toughs and scoundrels, sourdoughs from the Klondike, railroad men, Texas Rangers, cowpunchers, desperadoes, bronco busters, a gentleman or two, and me. They were all good fellows in their way, and each was eager to play his part in the grand adventure, once his head cleared, that is. Unable to regularly keep my diary, I made only rough notes, which I include here.

May 11, 1898, San Antonio: I have been assigned to Troop L under Capt. Allyn Capron—not a few Kansas fellows in the troop. Issued uniforms and equipment which took the better part of four hours. The food is execrable, although markedly better than the bill of fare at an Eastern Star luncheon there is plenty of it.

May 12, 1898: Equitation, followed by drill. To relieve the tedium, we drilled some more, after which we had some equitation, drill, and more drill. At some point, we had a roll call or two and ate dinner. The heat is infernal, but I must confess I am enjoying myself capitally.

May 13, 1898: Drill and more drill. Carbine practice in the afternoon. While sober clear-headed I shoot decidedly better, and to my surprise I am counted among the finest shots in the regiment. The active life suits me.

June 6, 1898, Tampa, Florida: We bid San Antonio farewell and entrained to Tampa on May 29. We traveled by train, hot and dusty, through the old South, stopping to take on water and coal and provision the horses. At every station the platforms were thronged with well-wishers who presented us with flowers, lemonade, pails of milk, and corn liquor. Typically, there was no one on hand in Tampa to tell us where to camp, and no preparations had been made at all to receive us. Many of the fellows were put out by this, but clearly they weren’t Masons or it would have been old hat to them the officers made a go of it and purchased food for us out of their own pockets. Rumor has it that we may transship to Cuba at any moment.

June 22, 1898, Daiquiri, Cuba: On June 7 the order was hastily issued to embark. We boarded the transport in all haste, only to wait on board for a week while the brass hats figured out what to do. These generals would make excellent Grand Masters. A stinking hulk, the S.S. Yucatan was overcrowded and hotter than hell with the lid on rather uncomfortably warm. Weighed anchor on June 14, and six days later we sighted the coast of Cuba. Under a naval bombardment we landed at Daiquiri without much incident although I somehow managed to fall overboard twice—once from the Yucatan and once from the lighter about one hundred yards from shore. Once ashore, we were approached by a platoon of Cuban insurgents, a ragged set of tatterdemalions, but for all that, decent fellows. Curiously, one of them, a small bespectacled fellow appeared to be making a Masonic sign on speaking to General Lawton, who it is said is a fellow traveler.2 The Spaniards had forgone any defense of the place and decamped into the thick manigua—the dense heavy bush that predominates on the island—and we set about making camp vexed only by the vicious black flies of which there were an inestimable number. A greater plague than even the flies are the abominable Cangrejo—land crabs as big as soup plates—hundreds of thousands of them crawling and scuttling everywhere and sounding exactly like a regiment maneuvering through the bush. Never having been confronted by anything so horrible, I discovered a real and actual dread of the accursed things, having shaken two from my boots and seventeen from my bedroll in the time it takes to write this.

June 25, 1898, Field Hospital, Daiquiri, Cuba: After a forced march inland yesterday, we received word to move forward with alacrity. The order was given to fill our magazines—a sure sign that we were about to see the elephant. As it turned out, we couldn’t quite see him, but we heard him plain enough. The Spaniards were entrenched on hills in a small village3 and we were ordered to drive them out. L Troop went forward and Sgt. Fish along with a number of us were detailed to move around them, but their fire was too hot and we soon went to ground. The Spanish rifles produced no smoke whatever when fired—rendering their formations invisible. The sound of their bullets passing overhead was peculiar, though, like the buzzing of a telegraph wire. At first we wondered what it was until some of our boys started dropping, Sgt. Fish among them.4 McCamish and I were nearest to him when he fell—we went to his aid, but alas life was extinct. Crawling forward, we scanned the hill and the buildings for movement, returning fire, but they were a long way off, and we did no harm that I know of. By this time the other troops had come up and we opened a general fire upon their works, but we could see little effect.

From my rather narrow perspective, this went on for what seemed like hours, and during that time an attack of different kind enveloped us. Hundreds of loathsome Cangrejo had emerged from the thick brush—there was a veritable rookery of them at this place—and began swarming over us as we lay firing at the Spaniards. I had already developed an abhorrence of these accursed carrion eaters from the night before, and before long I was covered with them. Horrified and shuddering, I tried to brush them off while trying to keep a steady eye, but to no avail. When one fastened himself onto my ear, I could stand it no longer, and I flew into a murderous rage became rather vexed and determined to rid all Cuba—indeed the entire Western hemisphere—of land crabs then and there. Quite unconscious of any other consideration, I rose sharply, flung the offending crab towards the hill, and at the top of my lungs bellowed “Damn their eyes! Let’s Wipe Them Out! No Quarter! No Quarter!” a few imprecations.

At this, I caught Col. Roosevelt’s eye—he was forty yards away on the right—and he smiled broadly at me, nodded, said something to the men about him, pointed at me, and of all things yelled, “Charge!”

I would have loved to join them—if only to be away from those detestable decapods—but on retrieving my rifle I was struck by a Mauser bullet in the arse butt sit-upon gluteus maximus posterior. Another bullet took off my watch chain and drilled a hole through my Masonic watch, narrowly missing perforating me entirely. Finally, what I can only assume was a spent bullet hit me in the head rendering me hors de combat. When I awoke, sore through and through, I was in a field hospital. Lying carefully folded on my pillow was a small packet containing my watch, and a note;

The Battle of Las Guásimas on June 24, 1898, was the first skirmish between Spanish forces and Americans on the Island of Cuba during the Spanish American War. The Rough Riders (1st U.S. Volunteer Cavalry) and two regular army units, the 1st and 10th Cavalry, engaged 1,500 men of the Spanish rearguard under Major General Antero Rubín. The fight, which lasted two hours, resulted in a continuation of the Spanish retreat towards Santiago and was hailed as an American Victory. Troop L was the most advanced of the American units at the start of the engagement and Lt. Allyn Capron and Sgt. Hamilton Fish were both killed in the early stages of the battle.

Bro. Brother’s offhand remark about Freemasonry among the Cuban insurgents is borne out in fact. Freemasonry was well-represented in Cuba at this time under the United Grand Lodge of Colon and the Island of Cuba, formed in 1880 from two competing grand jurisdictions and responsible for fifty-seven subordinate lodges and over 5,000 members. The Cuban Independence movement, and indeed prominent Cuban revolutionaries, among them Jose Marti, who joined the Order in Madrid, Carlos Manuel de Cespedes, a member of the lodge in Bayamo, and Antonia Maceo who was a member of a Santiago lodge, were among its members. Brig. General Henry Ware Lawton (March 17, 1843–December 19, 1899) was the highly decorated commander of the forces that landed at Daiquiri. Awarded the Medal of Honor in the American Civil War, and the namesake of Lawton, Oklahoma, he was later killed in battle in the Philippines, the only general officer to lose his life in the Spanish-American War. Lawton was a member of Summit City Lodge No. 170, Fort Wayne, Indiana, taking his degrees in 1866 but, interestingly, he was suspended for non-payment of dues in January 1868. Information courtesy Yvette Story, Grand Lodge of Oklahoma, and Bill Harting of the Grand Lodge of Indiana.