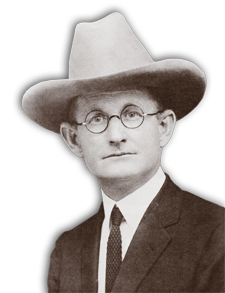 This year, 2012, the Inter American University of Puerto Rico is celebrating its one-hundredth anniversary of service to the island of Puerto Rico. This centenary institution was the dream of John Will Harris an adopted son from Texas, a visionary who was an outstanding educator, a Presbyterian Minister, and a Freemason.

Dr. J. Will Harris, as he preferred to be called,1 was born on January 12, 1876, in the town of Dripping Springs, Texas.2 He was the son of Mrs. Annie Evelyn Buckow, daughter of German Lutheran3 immigrants, and David Harris, son of Irish Calvinist immigrants. That religious, Protestant home was his first school.4 He grew up with his brothers David Edward, Charlie, Clarence, and Joe; their sister died when she was only two when they were living at Derby, Texas. Their home of prayer and devotion served as the main ingredient of their daily life which was stamped forever on this Freemason founding father of the Polytechnic Institute of Puerto Rico. The Institute eventually turned into the Inter American University of Puerto Rico, one of the largest private university systems within the higher educational system of the United States of America.5

Harris’s formative years were spent in rural Texas helping his father with cattle and horses. Nonetheless his spirit wanted to fly to other parts of the world to serve as an evangelist and educator. He wanted to help others, and to accomplish that dream he had to relinquish his outdoor rural life for a study desk. He left Texas with this clear goal in mind, and in 1902 he graduated with a BA degree from Park College in Parkville, Missouri.6 After that he was admitted to Princeton Theological Seminary in New Jersey, graduating on May 1905. On April 14, 1905, he was ordained in Brooklyn, New York as a Presbyterian Minister. Years later he was awarded Honorary LL.D.’s from his alma mater Park College and the University of Puerto Rico. He also received an Honorary Doctorate in Divinity from the Polytechnic College in San Germán.7 On May 17 of the same year he married Eunice White and accepted a pastorate in Pond Creek, Oklahoma.

However, that wasn’t exactly what he thought it was going to be—it was too quiet. He was looking for something more demanding, which moved him to seek a tougher challenge somewhere else with an international assignment. His petition for an international assignment was turned down by the Presbyterian Foreign Mission Board. Instead he was assigned to the new territory of Puerto Rico. He and his wife sailed to Puerto Rico on July 5, 1906, arriving eventually to the town of San Germán, what became his adopted home for the next 30 years.

The San Germán assignment was a real challenge for many reasons. It was a different culture and language in a predominantly Roman Catholic stronghold. In San Germán is located one of the oldest Catholic churches in all of the Americas. The Convent Church of Porta Coeli (the Gateway to Heaven) was built by the Dominican Order in 1609 and is one of the oldest church structures in the western hemisphere. Also the western part of the island, which includes San Germán, was the birth place of many of the liberal minds of the 19th century including the founding fathers of Grand Lodge of Puerto Rico.

Harris immediately started his demanding missionary work which, as time passed, turned into a more educational undertaking. He was a young, energetic, and strong man, described in 1906 by Henry Ford as a “man with a unique capacity.” Henry Ford was a Freemason, and John Will met many other Masons during his life, which without doubt influenced him. Further, many of the Presbyterian Ministers and other fellow American’s he knew on the island were Freemasons, too. He received legal advice from Rev. E. A. Odell, pastor of the Hugh O’Neil Presbyterian Church in San Juan, Hardwood Hull the owner and editor of the Porto Rico Progress, an English-language newspaper and staunch supporter of Harris, and Regis H. Post, former Governor of Puerto Rico, who were all members of St. John the Baptist Lodge No. 12 in San Juan.8 He was also a friend of Ulises Gregory, the Republican Party Leader in San Germán, a member of Luz de las Lomas No. 53 Lodge in San Germán.

His hard work paid off, and by 1912 his dream started to unfold when he opened the Polytechnic Institute of Puerto Rico on the Loma Linda Hills9 of San Germán. It wasn’t an easy endeavor but his strong work ethic, his drive to succeed, and his unquestionable desire to help others all bound to his deep faith conceived a dream of a small school that grew to become the second largest higher education system of Puerto Rico and one of the largest private university systems in the United States of America. As he fulfilled his dream of creating this institution, he searched for funds all over Puerto Rico and the mainland. On this quest he met very important individuals and Freemasons outside the island, among others President Theodore Roosevelt and Andrew Mellon.10

Between 1912 and 1913 he received a $2,500 donation from the wife of prominent New York financier Arthur James for the construction of a girl’s dormitory. Later, Arthur James Jr. gave Harris another $2,500 for a boy’s dormitory. By 1912, James Jr. was a minister in San Germán and eventually worked as a teacher in the Polytechnic Institute. We think that Bro. Arthur James and Bro. Eusebio López-Acosta (the lawyer for the Polytechnic Institute), both members of Luz de las Lomas No. 53 Lodge in San Germán, were very influential in getting J. Will Harris initiated into Masonry.

According to the lodge records, John Will Harris was initiated in Luz de las Lomas No. 53 on December 29, 1919, at the age of 43 years.11 It is interesting to point out two things. First, Lodge Luz de las Lomas No. 53 was chartered in 1912, its first Worshipful being José A. Vivoni, San Germán’s Mayor, and it was the same year that brother Harris started his new college. Second, like the majority of the blue lodges in Puerto Rico, No. 53 still uses the Scottish Rite Ritual and works in the Spanish language.

On May 6, 1922, he was raised as Master Mason and continued to be very active, in particular with his blue lodge. Bro. Harris expanded his relationships with other Freemasons in the island and abroad. He became very good friends with Dr. Juan B. Huyke who was a Presbyterian Freemason from Iris de Paz Lodge in the town of Arroyo, Commissioner of Education of Puerto Rico, interim Governor of the island in 1923, and Deputy Grand Master from 1918 until 1920.12

Another important figure was James R. Beverly, a native Texan close friend and Freemason. Bro. James Beverly came to Puerto Rico as Assistant Attorney General in 1925, appointed by President Calvin Coolidge. Later he was Attorney General and acting Governor on a number of occasions and was member for many years of the Board of Trustees of the Polytechnic Institute and Chairman of the Board.13

On March 2, 1937, John Will Harris passed the reigns of his beloved Polytechnic Institute to another Presbyterian Minister and Freemason, Brother Jarvis Morris.14 Dr. Morris’s main legacy was to get the Polytechnic Institute Accredited by the Middle States Association of School and Colleges. This was the first time that any college outside the mainland had been accredited by a regional accrediting agency.

Bro. J. Will Harris retired and moved back to his beloved el Guajolote Ranch in Dilley, Texas. Even then he returned many times to the island and on one occasion to receive a $1,000 donation from the Grand Lodge of Puerto Rico for chemistry and physics lab equipment.

After moving to Texas he transferred from his mother lodge Luz de las Lomas No. 53 to Dilley Lodge No. 1301 where he was one of the brethren who chartered that lodge on December 30, 1947.15 We know that he was very involved in community affairs in Dilley since he was the founding president of the Southwest Texas Clinic which provided medical services to his community.

Bro. John Will Harries died in Texas on June 14, 1956, due to injuries suffered in a car accident. His remains and those of his wife are buried in a monument located in the San Germán Campus of the Inter American University. Dr. John Will Harris was a very religious man, and a great Freemason devoted to his missionary duty and educational passion. He was a man dedicated to helping others in line with the precepts of the Masonic institution.

His dream turned into a great university with a present enrollment over 43,000 students in nine campuses all over the island, offering from associate to professional degrees in engineering, law, and nursing to masters and doctorates in many disciplines. This Institution has been the alma mater for many Puerto Rican’s including MW Hipólito Marcano who was grand master for thirteen years and recipient of the 33rd degree from both Supreme Councils, 33°, SJ and NMJ.

At the time of his untimely death, Brother Harris was active with Dilley Lodge No. 1301 and there is no doubt that the huge Lone Star State gave to Puerto Rico one of its finest sons and the little island of the Lone Star Flag returned back to Texas a great Mason.