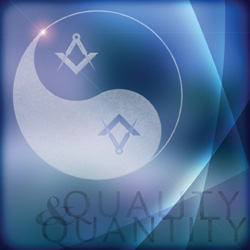 Notes from the Conference of Grand Masters

It was again a pleasure to be a participant at February’s annual Conference of Grand Masters of North America. An 800-strong group of Freemasons descended upon Atlanta, Georgia, to discuss the State of Freemasonry in the Northern Hemisphere of the Americas. This year twenty-four of our SGIGs and Deputies, almost two-thirds, were in attendance—a very impressive voluntary support for their grand lodges.

While some of the best fraternal business at the Conference was conducted in the hallways, around dinner tables, and in the lounge areas, meaningful discussions occurred in the scheduled break-out sessions. I attended several and found some interesting information on membership worth sharing. Since Grand Lodge membership relates directly to Scottish Rite membership, it’s important to understand Grand Lodge membership numbers.

Curiously, there was a “Yin & Yang” series of talks—one proposed speedy entry and rapid advancement in Masonry; another encouraged slow and deliberate progress in our gentle Craft. These opposites intrigued me since many of our Scottish Rite Valleys now offer One-Day Reunions, and our mind-set is to then move on to the next Reunion as fast as possible. Some of our Valleys offer only the five mandatory degrees—4°, 14°, 18°, 30°, and 32°, give each new Master of the Royal Secret his Bridge to Light, Master Craftsman packet, Lucite “ring” pyramid, valley jewel, dues card, and (it is hoped) a set of Valley by-laws … and a ham and cheese po-boy. (Well, in Louisiana we give po-boys; you may have different culinary customs in your Orient.)

Then we wonder why in three years these bright, new, enthusiastic 32nd Degree Masons become Suspended for Non-Payment of Dues (SNPD). Yes, three years—in 2011, of those who demitted or went SNPD, 11% had been in the Scottish Rite for 3 or fewer years, and 25% left before 10 years of membership. They joined and did not find what they were looking for. The value of membership was not realized! We Failed Them!

But, back to the Conference’s break-out sessions.

A recent Past Grand Master of a northern state with a large Masonic membership noted that in 1960, Masonic membership in the United States reached its high-point of 4.1 million members. In 2010, the membership was 1.3 million members. His state had 250,000 members in 1990 and currently has 110,000 members. His jurisdiction, not unlike so many others, finds the main topics discussed during meetings to be maintaining large buildings with rising insurance, property taxes, utilities, and anticipated maintenance, but not discussing or practicing Masonry. He presented Masonry today as being divided into two main areas: Fraternal & Fiscal—Love your Brother & Pay the Bills. In his state, Masonry pays property taxes on its buildings with 31% of dues going to pay that fee—not the insurance or utilities, just property taxes. How can any institution continue to exist under that fiscal burden with the number of members currently holding membership?

His solution was simple: Increase the number of members. He implemented “selective invitation”—seek and ask a man to join. His grand lodge also had a One Day Masonic Journey; district-wide conferrals (many small lodges could not confer degrees, so districts formed teams); printed rituals; relaxed dress code; balloting changed to three cubes for rejection; shorter meetings with “useless” ritual removed; and fees adjusted to match CPI to keep up with financial needs. These interesting ideas resulted in approximately 4,500 new Masons being added to the rolls over the last two years. The questions of how many others left over that period went unanswered, as well as how many of those 4,500 will maintain their membership after two years (remember the comment above on our three-year loss figure). If 25% of their new members joined Scottish Rite, that would be over 1,000 new members, a good increase; but again, how many would then maintain their membership?

The opposite discussion was presented by a younger man who was from a western state, discussing what he believed men today are seeking in Masonry—a “quality experience.” He belonged to a “Traditional Observance” or TO Lodge where meaningful and enlightened tradition was practiced; all members dressed up (formal dress—tails for degrees, tux for regular meetings), a catered meal was enjoyed at each meeting, speakers from other areas discussed different aspects of Masonry, each member was treated as being special to the lodge, and dues were $1 per day ($365 per year). His point was that Masonry is perceived to be special and thus his lodge treated it as special. When a man expressed interest in joining, he was invited to a lodge festive board (meal), introduced, and questioned as to his interests. After a period of several months of visiting, the lodge might then extend a petition if all lodge members agreed, and the initiation process began. The candidate, dressed in tux, was picked up at his home in a limousine, entered a chamber of reflection at the lodge, and only after several hours did the degree work begin—quality Degree work and lectures—followed by an Agape (another festive board). The new initiate was expected to deliver a paper on his experience and his perception of his initiation. The lodge has a waiting list of interested men. His closing comment was that today men are seeking … searching … hoping to find a quality experience to fill their needs. He added that his Lodge is not “innovative” but it is “renovative.”

Another Session presented by a mid-westerner involved retaining the members that we now have. The speaker had a simple formula: Obtain + Retain = Growth.

Communicating with members is important across all age lines. A 52-year-old communicates differently than a 22-year-old, and the 82-year-old has even more challenges crossing these age lines. Yet, there are some absolutes that we must use to sustain Masonry: 1. Fellowship; 2. Friendship; 3. Family Relationships; 4. Community Relationships and 5. Chance to be a Leader. Lodges and Scottish Rite Valleys must provide these five absolutes.

If local Lodges and Scottish Rite Valleys are not offering programs that provide relevance and value—what men are seeking and in the manner that they want it—then men will leave. If a member misses three meetings or events in a row, it is likely that he has lost his interest and will eventually drop off as a member that third year after joining, when the dues notice comes in and the “two-year no pay” suspension rule is enforced.

So using all of the pieces of information brings us back to some basics—men want to belong to something that offers them value in belonging. They want fellowship. They seek friendship, involvement for their families, service to their community, and an opportunity to be a leader. In some cases, Masonry has burdened itself with property—buildings that are creating issues that have nothing to do with Masonry.

I am definitely not in favor of returning to 1825 when all things Masonic rented space over taverns and mercantile stores. But a balance must be made if the Fraternal vs. Fiscal questions are to be properly addressed. Certainly not everyone is in favor of one-day classes, written rituals, dressing down more than we tend to dress down today, or shelving “useless” ritual in opening and closing. But neither is everyone in favor of long, protracted meetings and initiations where everyone is required to be in formal attire. Remember the great lesson of the Thirty-Second Degree: Equilibrium. Living in today’s world seems to present Masonry with unanswerable questions.

The Scottish Rite offers answers and solutions through the lessons of our degrees. The journey into Scottish Rite gives a man More Light through lessons of duty, practicing virtue, being faithful and just, practicing rectitude of life, being tolerant, doing good without recognition, being true, being wise, loving liberty, protecting the widow and the orphan, being better than oneself, loving honest work, practicing and teaching compassion, being humble and patient, reconciling all differences and quarrels with all people, loving God, inspecting our every action, and truly practicing Brotherly Love—impossible? You promised each of these during your journey into the Scottish Rite.

Quality/Quantity—you decide what is correct for you in Freemasonry. Practice the lessons of our Rite—the answers are there. Thank you for practicing the lessons each day.